How do you know when it’s time to let go?

I spent a chunk of my day off yesterday cleaning out the “kid’s closet”.  My district is having a yard sale on Saturday to raise money for Easter Seals, so I decided this was a good time to let go of some things.

The kids of the “kid’s closet” are my two nephews, who are now 13 and nearly 17 years old.  When they were little boys, I worked at a toy store; I figure that’s enough said, you can imagine the rest (it’s a big closet).  They spent a fair amount of time with me back then, but that was before they needed cable and the internet to stay entertained.  Back then, they were happy with a movie marathon and a marble maze.

We really did have some fun together.

I couldn’t get rid of the Marble Maze!  I’ve got two nieces to start enjoying, so some things had to stay. 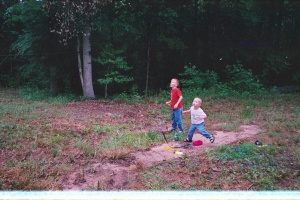 Another fantastic bit of fun – the Stomp Rocket.  Man, would those things fly high! If one landed in the woods, Logan would always send Peyton in after it, and little brother would march right in there. No Fear.

I feel like my blog is too young to be circling back in on itself already, but that’s kind of what life is like, isn’t it?  Like raindrops on the water – all kinds of big and little circles, constantly rippling out and intersecting with each other, over and over and over again.  Yesterday I kept thinking about my previous blog, Why Do I Hold On To Things?   You see, it was a little hard to get rid of what I still think of as the boy’s things.  To begin with, “getting rid of” something seems so callous and sort of mean-spirited.  I had to keep reminding myself that these toys are basically being donated.

There were some toys that I just liked and didn’t want to part with.  There was a yo-yo with a little case, extra string (still in a tiny, sealed bag) and a book full of yo-yo tricks.  Why did I want to keep that yo-yo? There’s no good reason, except I just wanted it.  Maybe I just wanted it because it’s mine. 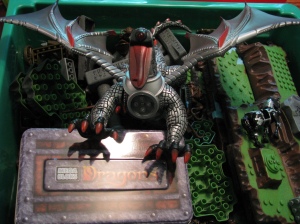 The dragon’s eyes would light up and he made some kind of noise that I can’t remember.

Some items were particularly hard to part with for more personal reasons.

The mega blocks, for example, because the boys loved them so much.  It was a treat for them to get more pieces and sets.

I can close my eyes right now and put myself back at Zany Brainy, back on the Young Builders aisle, back with the boys. 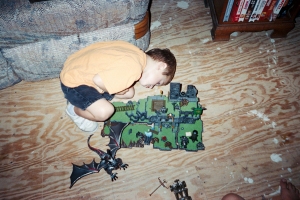 They’re trying to decide which set to buy.

I have “this much” money to give them, and they’re asking “how much is this one?”

“How much is this one, Aunt Michelle?  Can we afford this one?”

It’s so hard to decide which one to get.

Now they are gone, all grown up.

They don’t need this dragon anymore, so why should I?

It’s the memory I cling to.

The boys have grown up, but the memory of their time spent with me remains.

But…I kept reminding myself, “Let it go to someone who will use it”.

Instead of leaving it sitting in a closet for 8 more years – collecting dust, doing no good – let it go.

Let it go, not only for the sake of going to a kid who wants it and will play with it, but let it go to be loved once again. Toys should bring joy and laughter and fun and happiness to children.  They shouldn’t be closeted up, useless and untouched.

With those thoughts to buoy me, I joyfully and contentedly went on with my task, relishing the idea that all these toys that we had so enjoyed would soon be going to new homes.  They would be enjoyed again.

Knowing it’s the right thing to do doesn’t make it oh-so-much easier.  Basically, I was in the right mood, the right frame of mind to send those things on their way.  When the mood strikes, take advantage of it.  I just kept going, kept packing.  I made some  choices and kept a few things for the girls, but most of it went out the door.  It was still tugging at me – each and every item – “I want to keep this”.  It was never easy.  At the same time, it did feel good.  To let go, to move on, to clear things out, to open spaces up…

Don’t you worry about me, though.  There’s plenty more stuff where that came from.  I’ve got arts and crafts and stuffed animals and dishes and knickknacks and notebooks and glassware…  Anyway, there are other closets for other days.  But I’m not ready to tackle those yet.  And that’s okay, too.

It wasn’t this bad! I gave these trucks away – even though they are the cutest things EVER!

I may have felt a pang in my heart as I let some things go, but I made it through without requiring professional help.

As for the dearly departed toys, I packed them all in the car last night – out of the house! – and I dropped them off after work today.  The first thing I pulled out of the trunk was a wooden table hockey board.  The young man who was helping me said, “That’s a pretty nice hockey set.”  Tell me about it.  I told him it was hard to part with (what wasn’t), but I wanted someone to have it who would be able to enjoy it.

After all, it had its seasons of fast and furiously slamming wooden hockey sticks, smashed fingers, arguments and all around fun at my house.  Now it’s time to send all that joy somewhere else.

Buckets and buckets of toys came out of that closet. And bags and bags of toys went to the yard sale. 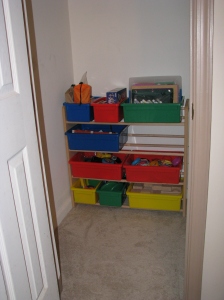 A cleaned out closet. No joke – this thing was packed from wall to wall and as tall as that toy caddy. Okay, I can’t lie – some of it wasn’t toys and has got to go back in the closet. But at least now there will be room for everything.

Why Do I Hold On To Things?