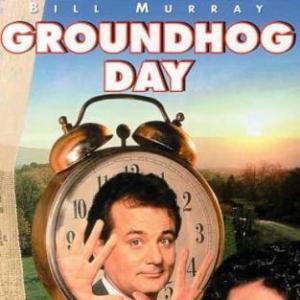 This is one of my favorite movies, and I think a lot of other people feel the same way. If you haven’t seen it (first off, shame on you), it’s about a guy who is living the same day over and over and over. He goes through various stages of acceptance and rejection of his circumstances, and it’s funny and sweet and kinda sad and totally thought provoking.

Probably the scene that always sticks out the most to me is when Phil’s in the bowling alley talking to his new pals Gus and Ralph. This marks a kind of awakening moment for him and is the start of his manipulations of all this extra time he’s been given. At the bar, he asks the guys what they’d do if they were stuck in the same place, living the same day over and over again, and nothing you do matters. Ralph says, “That about sums it up for me,” and I’ll admit that sometimes I have that feeling myself.

But as I was watching the movie last week, this little bit of dialogue really struck me hard:

I was asking myself what I would do with all of Phil’s time, whether I’d let it trickle away or whether I’d use it to expand myself. And it occurred to me how often I feel like there isn’t enough time left in my life to do whatever I want with it.

But that’s an excuse, I think. I could easily live 60 more years, and that is enough time. Even 50 years or 40 years or 30… That is enough time to make it worth my while to learn a new language or an instrument. Or go to that movie I wanted to see in the theater or take a class or start a whole new career. Or just to take a moment to chat or give someone a hand.

So what would you do with all of Phil’s days?

What do you want to do with the rest of your own?