this used to be my town

When I was growing up, it wasn’t entirely unusual for my parents to randomly tell us how things had changed in our town.  We are a fairly settled family, with both of my parents having done their growing up in Fredericksburg or one of the surrounding counties.  We mostly all still live here, including aunts, uncles and cousins on both sides.  Every now and then we raise a wanderer, but it’s unusual.   So when my parents say the town has grown, they know firsthand what they’re talking about.

Mary Washington. This used to be the Hospital. I was born here. Now there’s a massive new Hospital complex, which they call a campus. It’s way big.

Most of their comments involved Route 1, probably because we lived in the same neighborhood right off of it since I was in third grade.  When my parents were kids, Route 1 was still, as my Dad would say, “the mainest most road between Florida and Maine.”  Interstate 95 was still a toddler then, and I can well imagine that Fredericksburg was a different place.

What’s especially interesting to me, is that when I was a kid I used to think it was kind of a silly thing to care about.  One of them would say, sometimes in that far-away voice that memories tend to give you, “All of this used to be fields and farms and woods.  There were trees up and down this road for as far as the eyes could see.”  Me: “Oh, really?  That’s…neat.”  My attitude was, things change – of course it’s different!

My perspective slowly altered, as it does when you grow older, and I came to feel the impact of the alterations to my hometown.  Our town was still growing.  Through my pre-teens I had more of a sense of wonder about it.  My fixation seemed to center on Route 208, which is a road we traveled often, to get  to my Aunt and Uncle’s house or my Nannie’s.  When I was young, it seemed to take forever to get to her house from ours, on that long country road that I can still picture in my mind.  208 turned out to be my wooded lane of memory, for slowly but surely, it too was cleared and developed.  What was once a tree-lined, 4 lane highway, is now 6 lanes in most places and nearly wall-to-wall with businesses and subdivisions.

Victoria Theater.  This building used to house a movie theater, and it’s where I saw my first movie ever. I think it was The Fox and The Hound. Now it’s owned by a church. I don’t think many one-screen theaters exist anymore. I can think of three, but they’re few and far between.

The biggest shock to my system occurred when I went away to college.  It seemed like every time I came back, things had taken place that I wasn’t aware of.  I would get lost driving down what used to be familiar roads.  It was no longer sufficient to be told, “Take the landfill road and turn right at the big intersection.” Roads had widened and everything  was different.  The big intersection was now a huge  intersection, unrecognizable to me.  And new subdivisions were popping up everywhere, which brought new roads to contend with.

Who gave them permission to make changes while I was gone?  My feelings at that time were more of frustration, and irritation.  Entire roads were not where I left them!  It was like coming home and finding that strangers had re-arranged all your furniture, without leaving so much as a note of explanation. 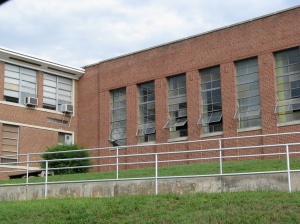 Walker Grant. This is where I went to middle school. Such an old building! We outgrew it by 7th grade, and my 8th grade class was the first to move up to the high school. I don’t even know what they use the building for now.

I’m finding that, oddly enough, I feel surprised by how much more has changed.  I’m trying to put my finger on what it was that I expected.  I guess the younger me felt that, “of course things are going to change.  Up to a certain point.  And then that’s it.”  The view I had of my hometown in those younger years, the really impressionable years when I was turning into myself, is the view I carry with me.  Fredericksburg when I was 16, 17, 18 – that was my Fredericksburg.  I owned this town.  Therefore it was, and I suppose will always be, for me, the ideal Fredericksburg.  That is how it was supposed to stay.

Is that how my parents felt? Do they still feel that way?

James Monroe. This is my high school. Except that when I went there, it was all on one level, and much closer to the road, and an entirely different building.

As I was driving around my hometown this week, I was reminiscing.  So many things to remember: riding the school bus, skipping the career aptitude tests and going to Old Mill Park instead (maybe I should have stuck around for that one), breaking my leg in middle school, singing a very uncomfortable solo in the high school musical, spending the night at Margaret’s, children’s theater, going across the street to smoke on hospital grounds because you couldn’t on the high school campus (I am now a non-smoker), the Purina building, football games at Maury, the mural in the hallway at Hugh Mercer Elementary, cruising town, Tri-County Pavilion (oh, the dancing! so much fun), swimming in the river, Skate Land… 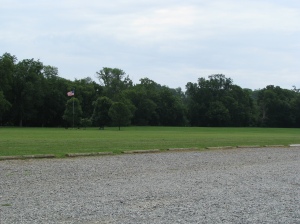 Old Mill Park. It may look like a big grass field to you, but it looks like happy memories to me. Among other things, this is where Toni and Margaret taught Jessi’s little brother to say shit. “I say ‘sh’ and you say ‘it’. That’s not cussing.” He was about 8 or 9. Jessi was not happy. I had nothing to do with it! Swear.

Rappahannock Regional Library. Before we had the internet (gasp!), there were things called libraries. This is the Library, and I used to go there to do research for school papers. Sometimes I would check out books just to read them. Did you know they used to make books out of paper? It’s true!

Some things are simply gone.  We no longer have an A&P or a Safeway, no Kmart lunch counter that was such a treat when we were kids, no Woolworth’s or Roses Department Store.  One of the original movie theaters just got too old and too small, and it’s now a shopping strip.  They used to have a drive-in theater, and I can remember seeing the movies on that gigantic screen as you’d drive by.  That theater is where we saw Platoon; I’ll never forget that.  And we went to Dirty Dancing 3 weeks in a row when they started dollar Wednesdays in an effort to drum up some business.  One night we saw Prince of Darkness and then went to Baby Boom right after, because we were too chicken to only see the scary one, much less as the late movie.  Memories, memories.

For Sale. A high school friend of mine used to live here. It’s interesting how many different areas of a city (or multiple cities) that you get familiar with. You run those streets for a time and get to know them like the back of your hand. And then, for various reasons, you don’t go there anymore. It’s weird to think that the place still exists, new people move in and out, life goes on there, even though you no longer get to witness it happening. Even though you are no longer there.

Happily, there are some things that never change.  The one way streets and one ways that turn into two ways and back into one ways – all those old familiar twists and turns came back to me so quickly.  Familiar is good.  A little bit of familiar goes a long way toward making the new more palatable.  Downtown is still the same, with its red brick sidewalk and historic buildings next to office buildings next to churches next to museums next to banks next to “antique malls”.  I guess my town is still in there…I just have to know where to dig.

Carl’s has been around for-ever (since 1947, anyway). Any trip to my hometown has to include a trip to Carl’s. This is a place that holds on to your memories for you – you came here as a kid, you take your kids to Carl’s, then your grandkids…You can count on Carl’s to be there. 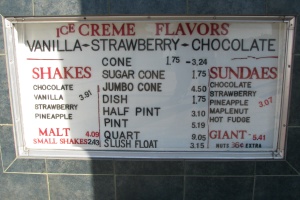 Well…maybe the prices have changed. But they still only take cash. I checked . It was strictly research for this post. Really. So was the shake. Delicious research. I did it for you. You can thank me later.

Hometown Tourist – getting out and about in my hometown