A Snake in the Grass…err…Weeds

So when I got home yesterday, there was an ENORMOUS snake stretched out across my driveway.

Well…there was a snake, anyway.

Despite having lived basically in the woods for over 13 years, this is the first snake I’ve seen near the house (about 50 feet away).  And that’s okay by me.  Actually, I can only remember seeing one other snake on the property, years ago.  I’ll admit that I thought of running this one over, but I just couldn’t bring myself to do it.

Louis was with me (my dog), so I really wanted that snake gone before we got out of the car.  He seemed to have his own plans, however.  I had to pull up to him twice before he slithered off the driveway and into the weeds, but then he just froze where he was.  I left Louis in the car, figuring I could scare him off by hand, so to speak.  I threw two sticks at him and a little rock.  And an acorn.

What I learned from this, primarily, is that I have terrible aim.  I also learned that snakes have a lot of stamina.  You would have thought he was stuffed.

Naturally, my next thoughts revolved around my camera.  I wanted that snake to go, but not before I could get Louis in the house and my camera out.  Done and done.  And don’t you know that snake looked exactly the same when I came back out?  I spent the next 10 or 15 minutes blinding it with my flash.  That’ll teach him.

He stayed perfectly still while I pulled out two weeds by his head so I could get a clearer shot. What was I thinking? 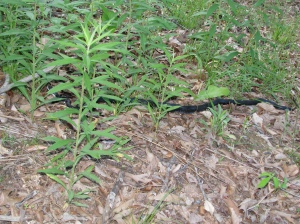 Here you can see the giganticness of his enormity. And also you can see how big he was. I'm not exaggerating. At all. Very much. All those green things are trees. Swear. 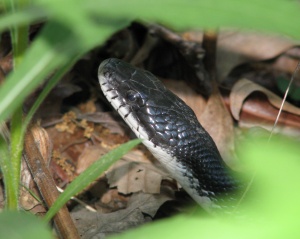 I bravely got super-duper close....with my zoom.

My mother is terribly afraid of snakes – like crazy afraid.  Like she acts like a crazy person if she thinks there’s a snake.  To the point of being afraid of toy snakes.  She’s so afraid of snakes that I can make fun of her crazy snake fear all I want here.  I know she won’t read this, because she’s so crazy afraid, that she won’t be able to look at the pictures.

I mean, I’m not afraid of toy sharks.  Please.

I’m a little afraid of toy zombies.  But that only makes sense.

What Are You So Afraid Of?