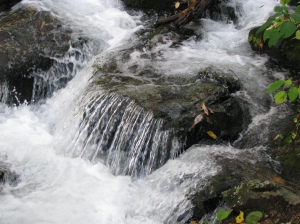 I feel compelled to let you know right off the bat that I didn’t make it to the top.  You see, I still have this cough…and…and…okay, I’m in terrible shape.  I got up to the first overlook without much trouble, but that’s not saying much.  By the next stop, I was out of breath and my heart was beating out of my chest.  Going into the hike, I didn’t think I would make it very far, but I did think it would be worth trying.  It was!  I got far enough to see a lot of falling water, which is what I wanted.  So I’m satisfied, with the view if not with myself.  And (you know me) I managed to take a ton of pictures, some of which turned out okay.

We’re in the woods, ya’ll! The George Washington National Forrest, to be exact.

Since I didn’t make it to the top, I don’t have much to talk about.  It’s a long hike, 3.4 miles I think, all uphill. The estimated time to hike the entire trail is three and a half hours and that’s pretty accurate.  I’ve linked a hiking website with more information, if you’re interested.  Most sites I looked at say that this is either the tallest, or one of the tallest, falls this side of the Mississippi River.  How cool is that, and in my backyard? Crabtree Falls is actually a set of five cascades, with the biggest drop measuring 400 ft, which is the tallest vertical drop east of the Mississippi.  Total elevation, of the trail at least, is 1,380 ft, and the total fall drop is 1,000 to 1,200 feet, depending on who you believe.

So anyway, we’ll take a tour in pictures and see if you think Crabtree Falls is as pretty as I thought it was. 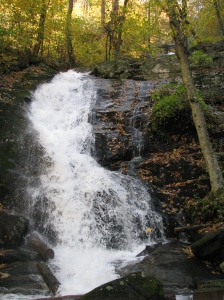 This is the view from the first “rest stop”. This is quite pretty, but there was much more to come. 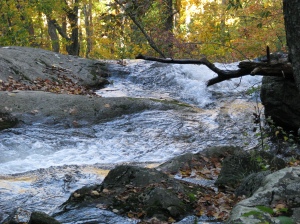 This is a shot from the next level up. See, falling water isn’t the only pretty kind of water at Crabtree Falls.

Well, technically this water is falling, too – just not straight down, over jagged rocks.

There isn’t an angle wide enough to show how far up the falls actually go. 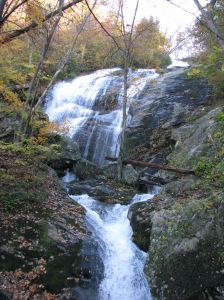 This gives you a little idea – this is only one part of the falls. There are falls below and above these. 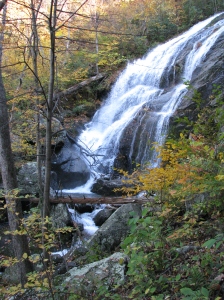 The upper part of the falls in the picture at left, as seen from a higher elevation. 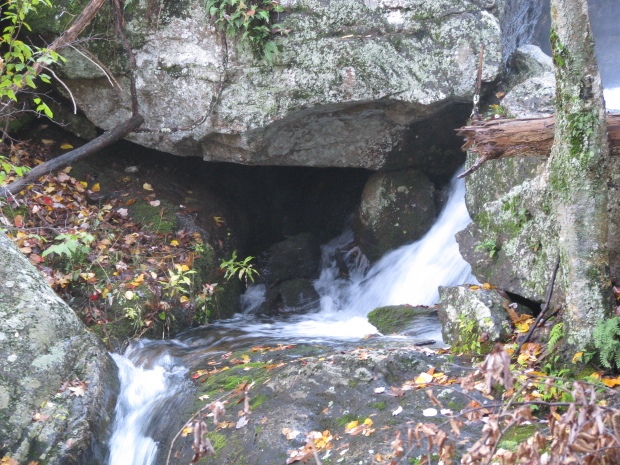 I was fascinated by the big rocks – to me this was amazing.  I mean, clearly that huge boulder was not always propped up on the little one.  At some point, that boulder was somewhere else.  What force of nature moved it?  Certainly time and gravity take their toll, winds and water have the power to carve out canyons, and so on; but isn’t it awe-inspiring?  At some point, that rock was liquid, at some point it was pushed up in the creation of the Blue Ridge Mountains, and now…now it travels back down again.  Think how long it takes – it’s far too long to comprehend.  To put it in perspective, these mountains were formed over 400 million years ago.  This rock existed before that happened.  Amazing. 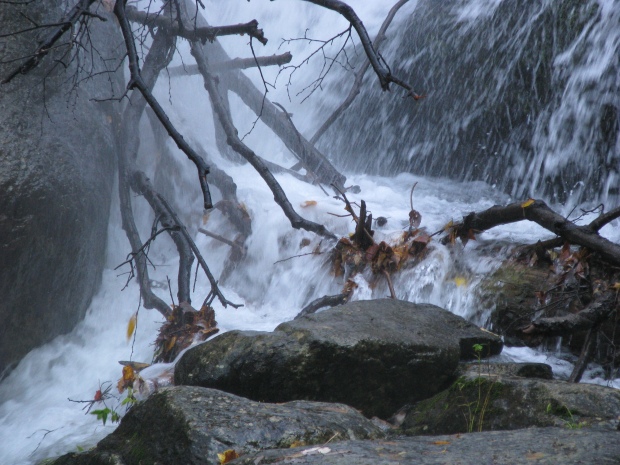 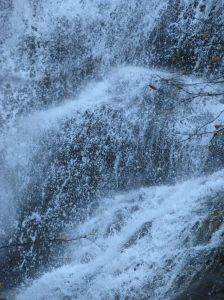 I don’t know why the water looks so blue in this picture, but I threw this one in just for fun. 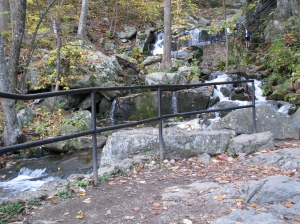 These railings are meant to keep the crazy people from plummeting to their death.

At the beginning of the trail, a sign warns you about how slippery and dangerous the rocks are.  It says that 23 people have fallen to their deaths while climbing around in places they shouldn’t have been.  Even so, I was tempted.  Because, you know, that wouldn’t happen to me.  But I didn’t do it.  I really wanted to, but I didn’t.  I just kept reminding myself that I didn’t want to be the reason they had to replace that sign. 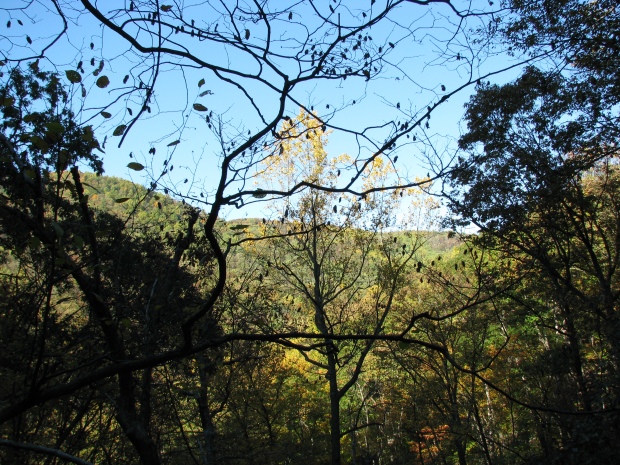 This isn’t a waterfall. But I thought it was pretty interesting just the same. You can see, through the layers of trees, what Fall has been looking like here in Virginia. In this one shot, we’ve got a bare tree in the foreground, a bright yellow tree in the middle, and a green hill in the background. 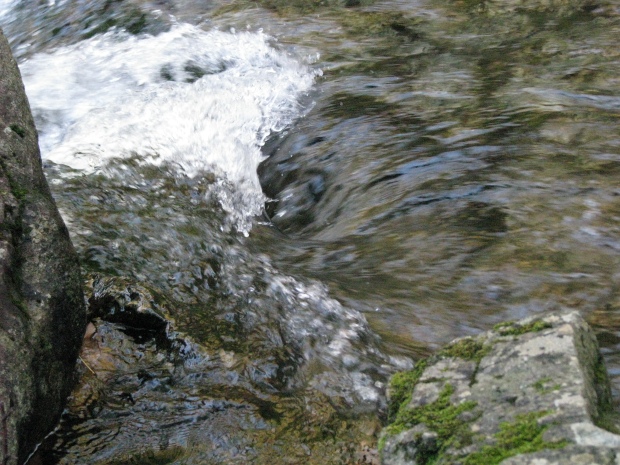 another one I added just because I like it

And one more for the road… 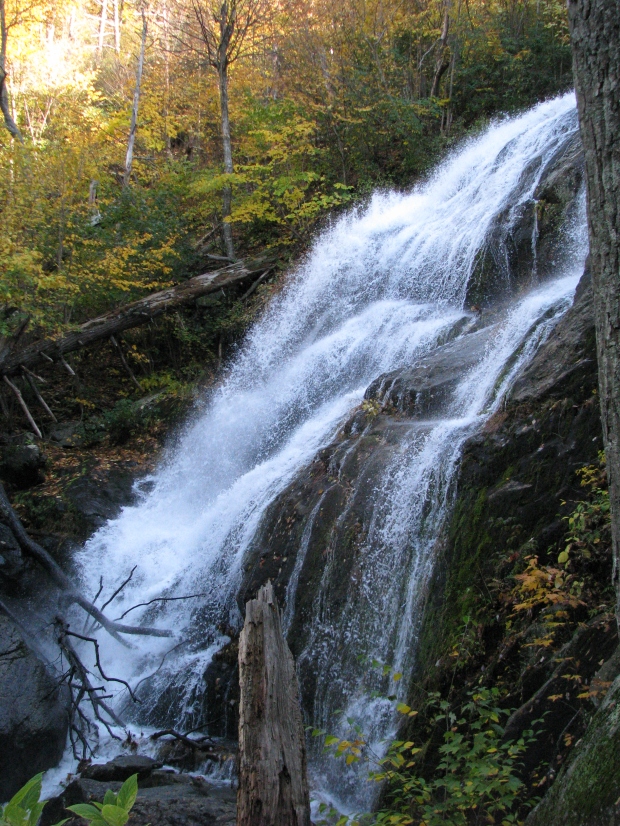 There is water spilling from the top of a mountain! Just think about it. The world is a beautiful and fascinating place, and I’m mighty glad I live here.

Dang – that’s loud!  We’re already planning to go back next year.  And I’m planning to make it to the top.

I’m sorry, I had to give myself a minute.  I was momentarily incapacitated by laughter.  Anyway, I’ll let you know how that goes.