So, I was driving along the other day and I pull up behind a mini-van with a vanity plate.  That’s not such a big deal in itself, because where I live they’re all over the place.  Vanity plates, I mean.  Mini-vans too, but that’s not what this post is about.  Anyway, this driver struck me right away as someone who is very comfortable in their own skin, someone who knows who they are and aren’t afraid to advertise it:

That’s what the tag said!  Of course, maybe it was a gift or something. END_OF_DOCUMENT_TOKEN_TO_BE_REPLACED

A technician from the alarm company came to the store last night to fix the keypad on our back door. Which I had called in.  Which, it turns out, was not actually broken.  Apparently my brain was broken.  Is broken?  Anyway, this is what happened:

END_OF_DOCUMENT_TOKEN_TO_BE_REPLACED

So.  On the way home from work tonight, I picked up a toddler who was standing at the side of the road. END_OF_DOCUMENT_TOKEN_TO_BE_REPLACED

In Which It Is My Own Darn Fault

I have no air conditioning in my car and I’m boiling and sweating by the time I get to work.  So I guess what I’m saying is I’m boiling in my own sweat.  Lovely.

And it’s my own darn fault.  MY OWN.  DARN.  FAULT.  You can tell how irritating I find that because of the capital letters.  Please tell me I’m not the only one who makes bad decisions now and then.

The thing is, it was very late.  I got off work at 10pm, then I went to the grocery store (how much do I love the Wegman’s let me count the ways), then it takes another 40 minutes to get home from there, so.  It was very late.  And it had been storming off and on all evening, with lots of heavy wind.  And the last stretch of road before my house is a big hill, fairly steep and it’s long.  And I had gotten almost all the way down this hill when I suddenly came upon a tree that was laying across the whole road.  And it wasn’t a huge tree; it was a smallish tree.  And it frustrated me.  And I did something really, really stupid.

I ran over the tree.

Why oh why do I do stupid things?  Why do I do things that I know better than doing?  It’s almost on impulse…except for the fact that I gave it thought.  What’s a mixture of giving something thought and then following an impulse anyway?  Is there a word for that?  Because honestly, I just don’t know what I was thinking.  I guess I just chose the simplest thing to do, which is drive over it.  Not smart.  At all.

The interesting thing is that on another night I probably would have just turned around.  I suppose a lot of what we do simply depends on the mood we’re in.  I wasn’t in the mood to really consider the entirety of the situation and make a rational decision.  And now I’m suffering the consequences of no air conditioning.  Not to mention the money it cost to fix the radiator.  Oh didn’t I mention that yet?  The radiator: 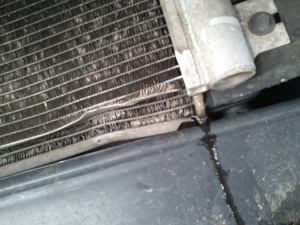 The radiator took about a week to start leaking.  So I had it replaced.  That’s when they found out the condenser coil was jammed into the radiator.  That’s when I found out that I would have no air conditioner this summer.  But it was still cold then, so I didn’t care as much.  I put off caring until now. Now I’m boiling in my own sweat.  Now I care.

I would have gotten the air fixed already, except for two reasons.  One is that I believe in negative consequences; I think they’re necessary.  I figured I did something rash and so I should suffer.  That’ll teach me!  Perhaps we can learn without there being major repercussions, but our mistakes teach us through negative reinforcement, even if it’s just a minor discomfort or embarrassment that we feel.  Consequences help us remember our mistakes because they make an indelible impression; the harder and worse the consequence,  the stronger the impression is for you not to make that mistake again.  The second reason is that I have no money.  (Which is a consequence discussion for a whole other day.)

I don’t think I would have learned any lesson at all if I had not damaged my car.  If the same situation occurred again, I probably would have thought, “Well, it worked last time.”  And I would have done the same stupid thing.  Again.  Of course, I only call it stupid now because of the negative consequence attached to it.  If it had worked, I may never have thought about that tree again.

As I was driving home from work today, I was thinking about how I needed to finish “the post about running over a tree”.  Amazingly enough, I suddenly came upon this:

I thought about going through, but I wasn’t ready to suffer the consequences.  Again.