A different view of sunset 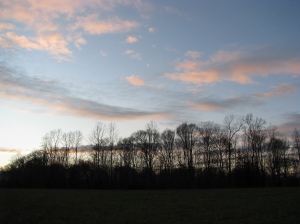 I’m still getting used to this whole time change thing, and it keeps coming as a surprise to me when I see the sun heading for the horizon at 4:30 or so.  Today was no exception.

Since I was off, I had all the blinds pulled up to let in however much light we get anymore.  It was nice, because throughout the day, the sky was a pretty interesting mix of dove grey cloud and blue atmosphere, with the sun peeking out every now and then.

Late this afternoon, Louis and I were sitting in the living room.  I was working on some blog maintenance, and he was on the couch watching a movie.  Really, he was sleeping, but when you look at him, he always pretends that we was just resting his eyes for a moment.  All of a sudden, the room was lit with a bold splash of golden afternoon light.  It was bright enough and sudden enough to surprise us both, and we literally jerked our heads up and looked at one another in surprise.  Which was kind of a weird experience, seeing as he’s a dog an all.

I had to get up and take a look out the window.  The clouds looked like this, only 10 times more brilliant and they were golden, golden, golden: 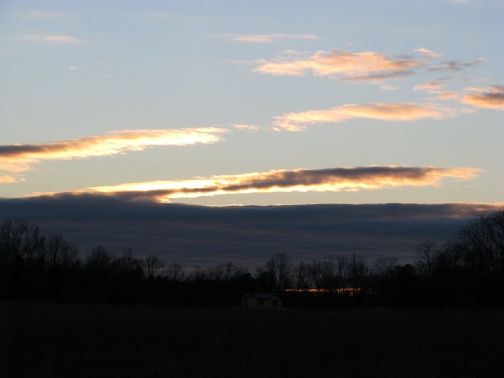 If you follow my photo blog, then you’ve already seen pictures of my front yard and some of the wonderful sunsets I’ve watched disappearing behind the trees.  But there’s a huge field that begins just beyond my little range of trees, and I’ve been wanting to drive out there to get some “other sunset pictures”.  The opportunity today was too good to pass up!  I couldn’t get out there fast  enough to capture that golden light that shot through the window, but there was some great color, nonetheless.

We drove out across the bottom of the field at first, keeping to the left hand line of trees in an attempt to capture as much skyline as possible.  Unfortunately, the field dips down just a bit too much on that side, so I wasn’t able to get a lot of deep color in these shots.  But you know I do love my silhouettes, and there were plenty of those to be had. 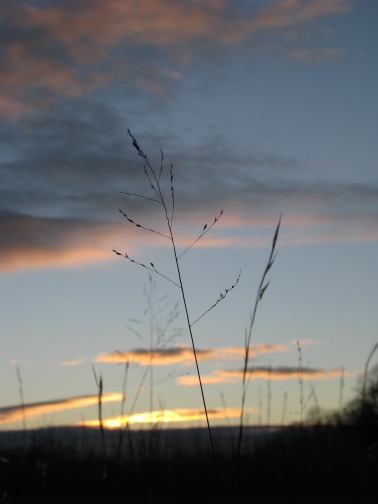 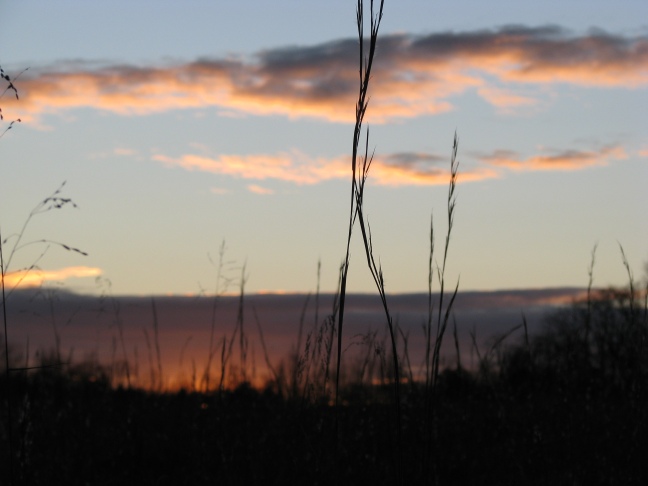 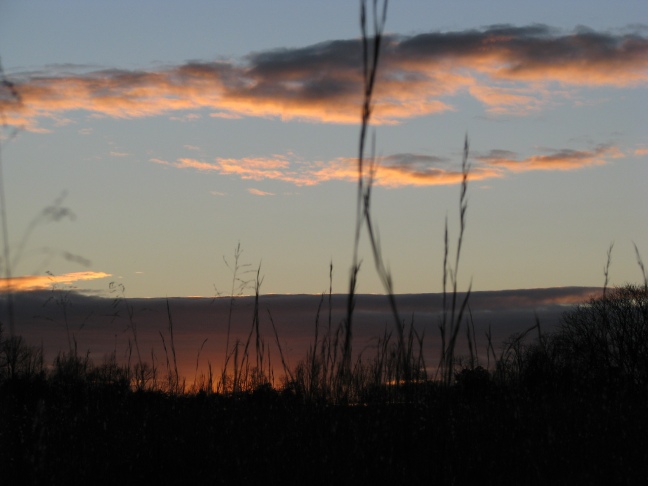 Naturally, as soon as I take a few (okay, a few dozen) pictures, my batteries give out on me.  This is when I remember that I haven’t charged the batteries that were running dead at the baby shower.  But no worries (were you?), I had some regular batteries for backup!  I had to go back to the house to get them, because I’m nothing if not unprepared, but at least I had them.

This time, we followed the driveway to the right and went all the way around to the other side of the field.  My neighbor’s live on this side of the farm (we used to grow alfalfa here, but that is a story for another post), and this is their house: 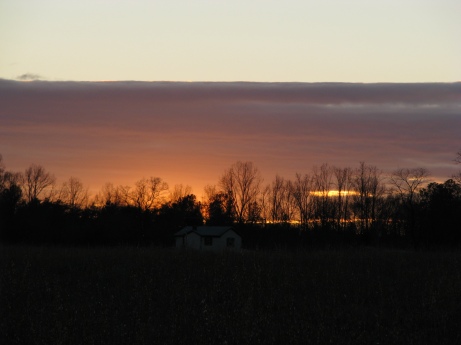 Really, this is just the second story of their house. I was still rather far away, and the land rolls here in long waves that play tricks on the eye.

That perfectly straight cloud line was something to behold.  It lasted the entire time we were out there.

I tried driving across the field up here at the top, but the tufts of grass were plucking and tearing at the underbelly of my car in a loud and scary way.  If the grass had been water, we would have been in serious trouble.  As it was, I began to imagine that the field wanted to swallow us up, so we drove back to the beaten path and waded out on foot. 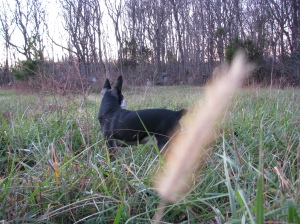 Louis would run and hop from low spot to low spot, around and over the thick tufts of grass. In many places, it was almost as tall as he is. 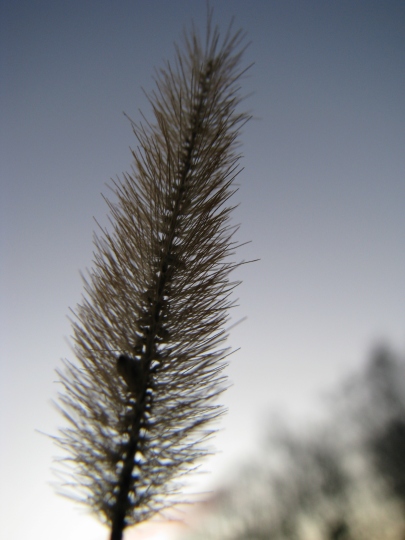 As a general point of interest, these photos are laid out in the order that I took them.  The only exception is the photo below, which I moved up one spot so the two pictures of the tree line could be placed together.  Isn’t it interesting what a difference the tilt of a camera can make in the lighting?  Or simply turning to face another direction?  Photography is fun, ya’ll! 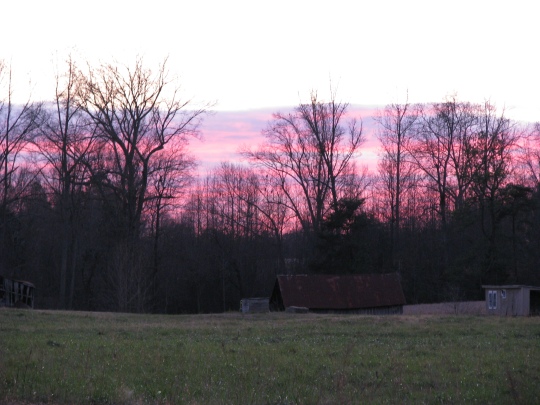 Here is a little color! But don't the sheds and barn look quaint?

I don’t normally cross the field, but I did about a month ago, and that’s when I realized what I was missing at sunset.  Ever since then, I’ve been watching for an opportunity to get my pictures.  And this is what I’ve been wanting to photo, these magnificent trees! 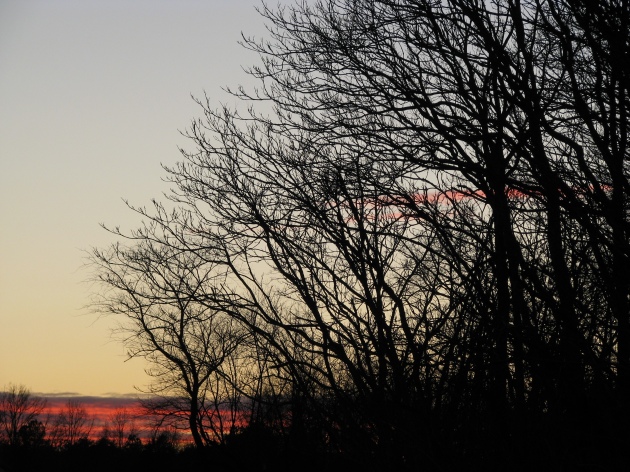 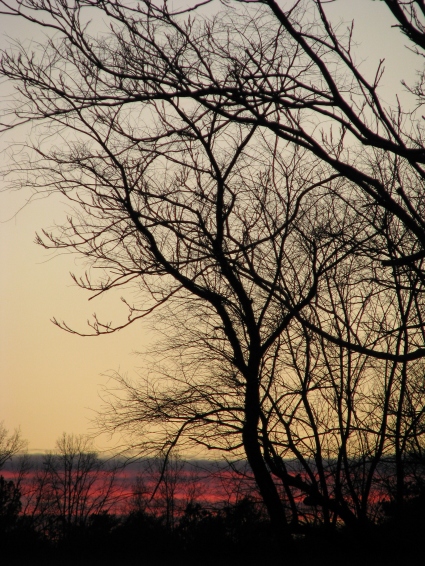 There’s just something about a tree.  Clothed or naked, whether the lines are graceful and flowing, or crinkly and craggy and full of witchy-knuckled joints, trees captivate my attention.  There is something in the vision of a tree that sparks an imagination in me so profound that it surpasses the usefulness of thought and words; it simply carries me away.

I’ll leave you with a last silhouette (hey, I finally spelled it right without spell-check!), because I think they’re awesome too.  I just can’t get enough of trees and silhouettes.  Or silhouetted trees.  But you know this. 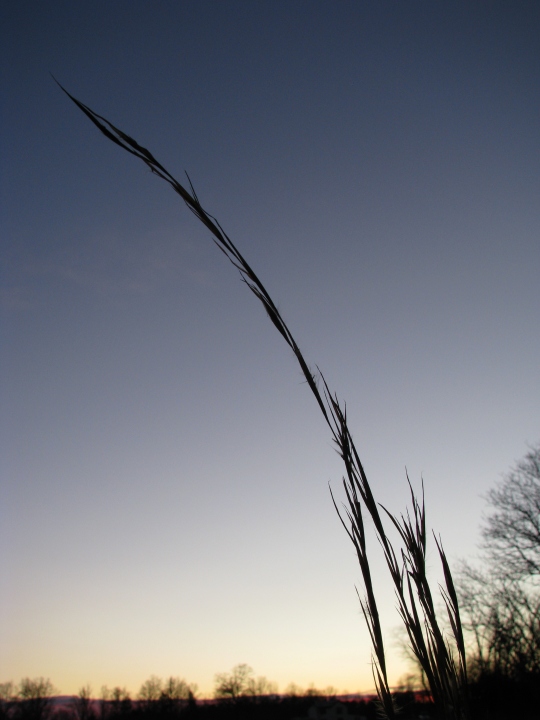 Perfect Autumn Evenings by me (my last walk with Louis)

Tags: autobiography, living in the country, nature, photography, sunset, trees
From: Photography
← on the other hand…
Week in Review – Holiday Spirit →
14 Comments Post a comment